The very brilliant i luv cinema has been ever so kind and has awarded me with this nifty little award! Thank you so much for choosing me for this little honour. Hope it justice!

I’ve now got some things to do for this award. Here’s a breakdown: 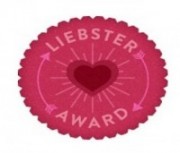 Shall I make a start?

1. At school when I was about 5 years old we had birds of prey, a hawk and a barn owl, in to take photos with. I was desperate to have a photo taken with the hawk – it was massive and beautiful. But sadly, only boys were allowed the hawk and girls the barn owl. I was one disappointed girl. I’ll have to dig out the photo one day.

2. With the London 2012 Olympics coming to a close, it has reminded me how much I love sport. When I was very young I was in my school’s hockey team. Later on I was in the tennis, lacrosse and rounders team. I was team captain for our rounders team for a couple of years and won a county championship! Oh and I was also a javelin thrower – I could throw a tennis ball the longest distance in my school. Was also in a swimming club for a good long while. Speed training, stamina, bricks off the bottom of the swimming pool floor in my pyjamas. You name it. I did 5K in the pool when I was about 11. I could NOT do that now!

3. At one point in time I wanted to be a veterinary surgeon. It was all I thought I ever wanted to be when I grew up. That moved on to wanting to become a doctor. Do I regret not going to do medicine at university? God no. I have huge amounts of respect for all of those who do, but I really kinda like my life right now. I don’t envy those young doctors and their crazy shift work and life or death craziness.

4. I used to play the violin and the bassoon when I was younger. Loved both of them. More so the bassoon. Lovely wood wind instrument that I sometimes I still wish I played.

5. I’m a cryer when it comes to film or TV. Whether it’s for happy or sad reasons, chances are, I’ll have tears streaming down my face. The first film I ever cried in was Short Circuit 2.

6. I can remember the night of the great hurricane of 1987 that hit the south of the UK. Well, great storm/hurricane. Yes, I was only 3 years old at the time, but I remember it so vividly. I do remember being pretty inconsolable that night. The sound of the wind completely freaked me out! The next day I remember driving over to family’s houses to see if everyone was ok – there were trees in the road and my gran’s greenhouse had imploded.

8. I honestly can’t remember when or why I got into photography. I know it happened in the last 10 years, but I can’t remember what spurred me on with it. Though, I’m glad I did get into it.

9. Linked in with #2 – when I was a child, I hated water. Swimming was my arch nemesis. I did not want to know about it at all. My main fear came from the fact that in the swimming club I was the only one who couldn’t touch the floor! Turns out, that was just the driving force to get me into swimming.

10. I love to garden. If I don’t have any work to do and it’s a nice day, I find gardening incredibly relaxing. I think it’s something I’ve got from my mum.

11. Apparently Sean Connery once laughed at my at a pizza restaurant in Notting Hill when I was very little. This is a story my parents told me. I was adamant in cutting my own pizza despite having a track record of making crockery crash in public places. I did just that, but managed to keep the pizza on the table. Sean Connery laughed from a corner of the restaurant.

Now for i luv cinema‘s questions:

Seeing as I’ve only seen 1.5 Harry potter films, I’m going with LOTR. I never got into Harry Potter, the books or the films. Nothing about them ever appealed. LOTR on the other hand – LOVE the whole trilogy. Up there as one of my favourite all time trilogies. One of!

What’s the longest you have waited in line for a movie?

DuckTales. Before the days of Internet booking, my brother, uncle and myself queued up for the film when I was just a little person. I can’t remember how long. But our queueing failed as we didn’t get tickets for the first screening and ended up going in the afternoon.

Have you ever fallen asleep in a film? If so, which one?

Never. I might have done that head nod thing a couple of times during Haywire, but never fallen asleep properly. Well, I’m only thinking about cinema visits.

What was your first concert experience?

Something my parents took me to when I was little. Classical music something or another. It clearly left a mark on my memory!

If you could go anywhere in the world, where would it be?

Currently it’s Hawaii. I am ITCHING to go to Kauai. I love tropical islands. I’ve never been to any of the Pacific islands and would love to go to that side of the world.

I don’t think so. I can’t roll my tongue. Barely roll my r’s. My elbow is slightly double jointed, but not really. I can’t sing. Really can’t dance. I just am what I am.

In terms of foreign films and TV – yay. One of my favourite TV shows of this year has been The Bridge and one of my favourite films – Headhunters. Funnily enough, they’re both from roughly the same area. Roughly. Though subtitles just for the hell of it? Nahhh.

What book would you like to be seen made into a movie?

It’s a graphic novel – We3. Think Homeward Bound with the animals being armed like tanks. I adore that graphic novel so very much. I remember there were rumours of that film being made, but they were just rumours.

What is the first thing you would do if you won the lottery?

Scream at the top of my lungs. Probably throw a profanity or two in there. That would be the very first thing I would do if I won the lottery.

Have you ever snuck into a film without paying for it?

Nope. I’m just too good. I have contemplated it a couple of times. When I was a wannabe unruly teen.

What is your favorite silent film?

I’ve only seen one – The Artist. So, I will have to say that. Hmm, maybe this is a genre I need to educate myself with…

Here are my questions

And Finally the 11 I’m passing this award on to

I’m not sure who’s already been bestowed one of these, here’s hoping you haven’t already!