The horror film genre is probably one of my favourites. Something about sitting in a dark room waiting for something to happen but not knowing exactly what will happen. Well, that’s what a good horror film should be. In my eyes. It’s funny. I don’t actually get scared when watching horror films. I very, very rarely jump. Things have to engross me a heck of a lot to get a jump out of me. And yet, I just get some sort of kick out of horror films.

For me it’s all about films like The Shining, Scream, The Blair Witch Project, The Devil’s Backbone, An American Werewolf in London, Event Horizon, The Thing, Alien, Jaws, The Orphanage, [REC], The Cabin in the Woods, Final Destination.

Sadly, the horror genre’s not exactly got a good reputation. Things can get real schlocky and way over the top gory. As what happened with the Saw genre. Or just plain boring, as with the Paranormal Activity series. Or just tired and predictable – Sinister, I’m looking at you.

Thankfully, my faith in the genre’s been put at ease with two films. One new. One fairly old. Let’s start with the old.

The Descent has been on my to-watch list for a while. I just kept putting me off. I think I was holding some sort of stigma against it being a Brit horror film. Doesn’t make sense. I know that. But I put my issues aside and sat down to watch it.

Instantly I’m given a group of characters I couldn’t really give a crap about. Oh dear, was my initial thought. Seriously. Who are these women that I do not give two shits about? Ohh one of them has had a horrible incident happen in their life. There’s the nuts one and, well, I couldn’t remember the others. Why do characters in horror films have to be so bland or formulaic?

I plodded on. And grateful that I did. Sure the characters aren’t up to scratch, but Jesus Christ, the rest of the film was excellent. As soon as the ‘events’ started kicking off, I knew there was more than a half decent horror film in here.

The feeling of claustrophobia wasn’t something I ever thought would get to me. But boy did it get to me while watching The Descent. The whole feeling of there being no way but forward, but even then, that’s not a guaranteed way out. The tension throughout the film was excellent and it held up right to the end. 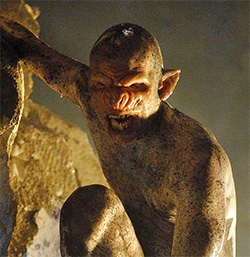 The ‘creatures’ reminded me of the Turok Hans from the final season of Buffy the Vampire Slayer. I’m not even joking. Look at them!

Now the ending. Well, see I thought that it meant that Sarah and the rest of them never got out of the cave system. That, maybe, they killed each other. Or Sarah went bat shit crazy and killed everyone. But. There’s that sequel. That I’ll not see. But apparently she’s alive. No. She’s not. She’s dead in a cave.

So, in short. The Descent – excellent horror film.

The Conjuring is a bit of an opposite sort of film. The storyline is fairly generic in terms of horror/ghost stories. But, unlike The Descent, it’s the characters in The Conjuring that made me believe in the film. If I didn’t feel for Lorraine and Ed Warren or the Perron family, it just would have been like any other ghost story.

Sure, the horror aspect of the film is good. For once, we’ve got a horror film that doesn’t rely on loud bangs, quick cuts and cheap tricks to bring about a sense of fear in the viewer. Instead we’ve got a film that has some slow building tension that genuinely makes you wonder what’s going to happen next.

I know this makes zero sense, but I thought the film was inventive without feeling like it needed to reinvent the wheel. Make sense? Nah, didn’t think so.

The story itself is made more interesting with the intertwining of the Lorraine and Ed’s history with the problems that the Perrons are facing. And they’re GOOD people. They’re good people who you want to see through to the end of the film. You care for them and what they do. I certainly didn’t feel like that while watching The Descent. But that film had other merits. 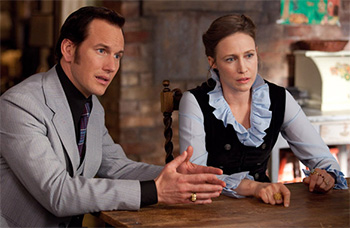 The acting is good too. Vera Farmiga and Patrick Wilson are both excellent. Particularly Vera Farmiga. Lorraine is an incredibly strong female character. But it’s not all woman power, RA. It’s about working in partnership with Ed, together, to make things work. Their relationship was one of my favourite things about the film.

Looking forward to seeing the film again. As soon as it rolls around to the TV.

Feels like it might be a while before I can jump up and down about another horror film. Correct me if I’m wrong!