If you asked me this time last year whether Bahrain would have been a holiday destination of mine. Twice. Before 2013 was out, there would have been one heck of a confused look on my face. And yet here I am. It’s the beginning of 2014 and I managed to squeeze in two trips to the little Middle Eastern island that is Bahrain between September and the end of the year. And they were both fantastic trips.

This last trip went by too quickly. Wait. So did the first. Well, it happened again. Arrived in Bahrain on the 21st December and it was pretty much all go from day one. Day by day recollection is tricky/impossible. Because there was so much stuffed into the trip. Eating took up most of the time. So much eating. So much good food.

Breakfast is the best meal. While I didn’t get treated to my usual favourite, my SO’s pancakes, I did get one of the best breakfasts I’ve ever had: 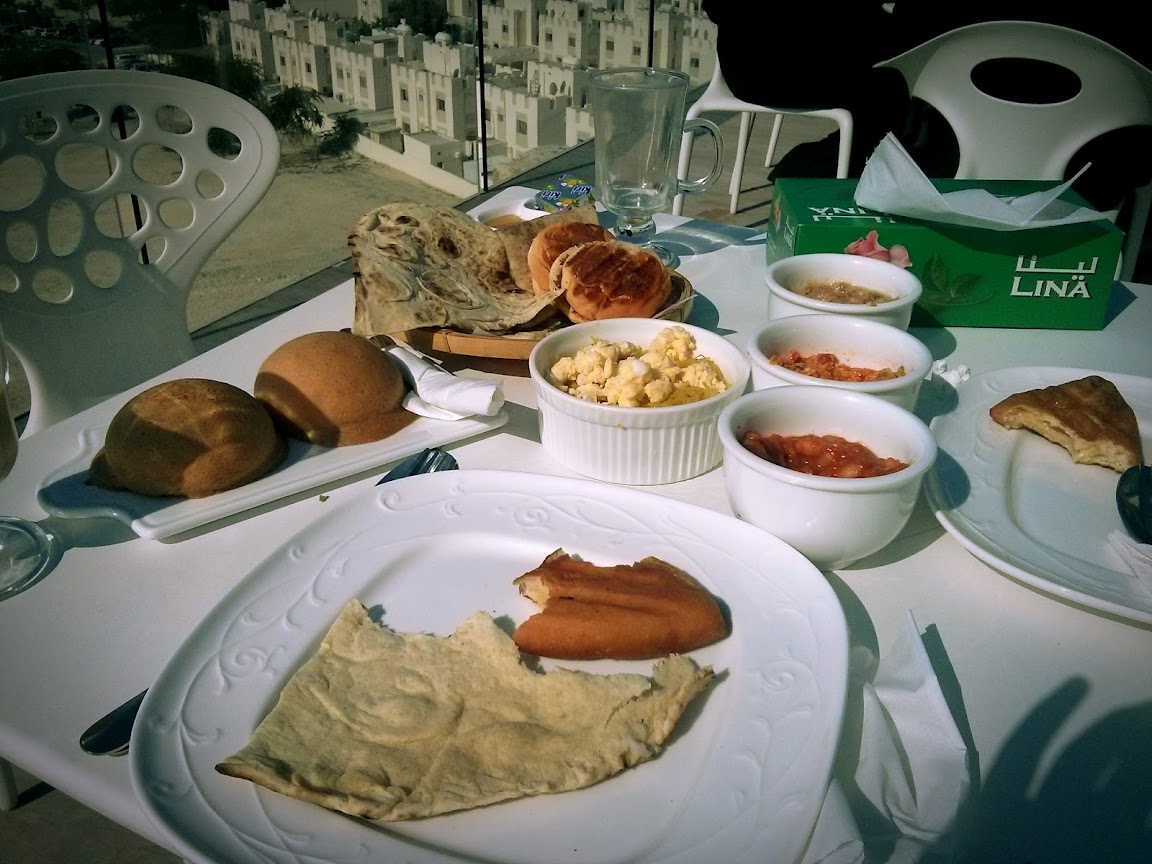 Breakfast at Saffron by Jena

Photo taken just after I remembered I needed to take a photo of the food before it got devoured. See this was the second time of having this breakfast at Saffron by Jena. What do we have here? Well, there’s some ful medames, eggs and tomatoes, eggs and sweet noodles, spicy baked beans sorta thing, a little sweet bun toasted with cheese in it, flat bread with fish paste, bread with split lentil and crunchy stuff in, sort of sweet bread and labneh (type of cheese) and thin naan style bread kinda of thing. Oh and a stunning cup of chai. 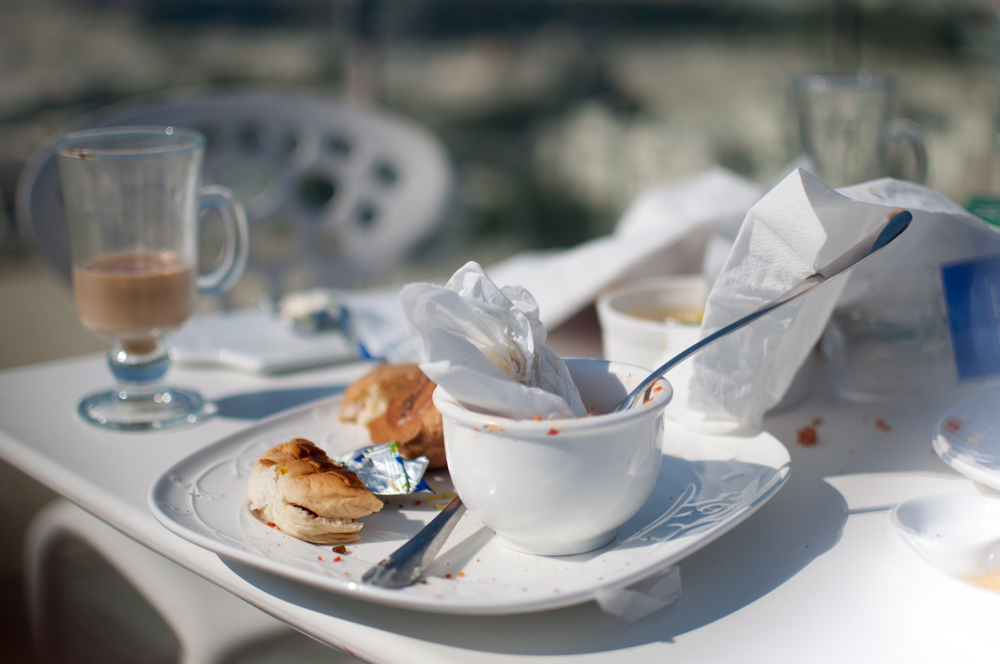 So, as I said, this was the second time we had this breakfast. First was at Manama souq and this second time was at Riffa Fort with one stunning view:

The view from Riffa Fort

The weather that day was just perfect. Clear blue sky, a little bit of a breeze and about 18 degrees C, or so.

Like I said, breakfast is the best. While the breakfasts I had at Saffron were my favourite I still got to have my other home cooked favourite – breakfast tacos: 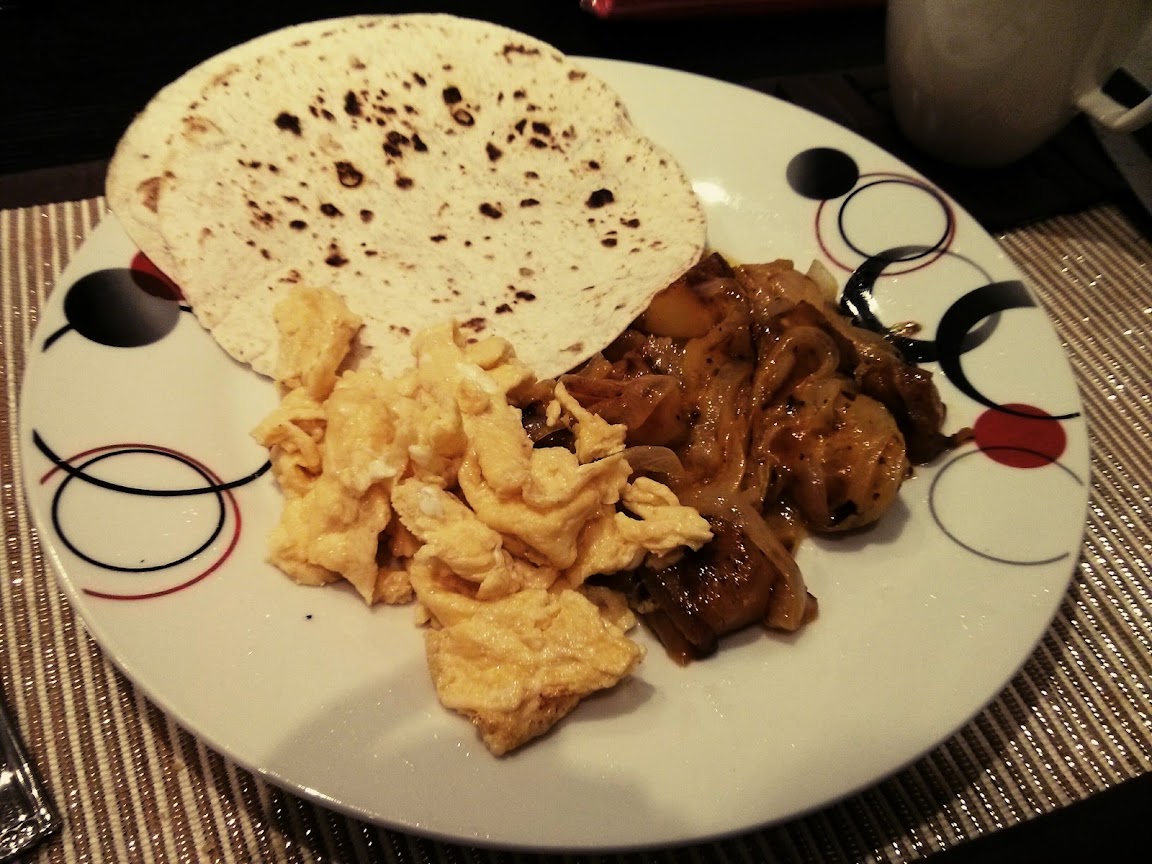 While I’m on the topic of food, if you’re ever in Bahrain, head to Gusto for a really, really good pizza. And pretty damn fantastic salad too. 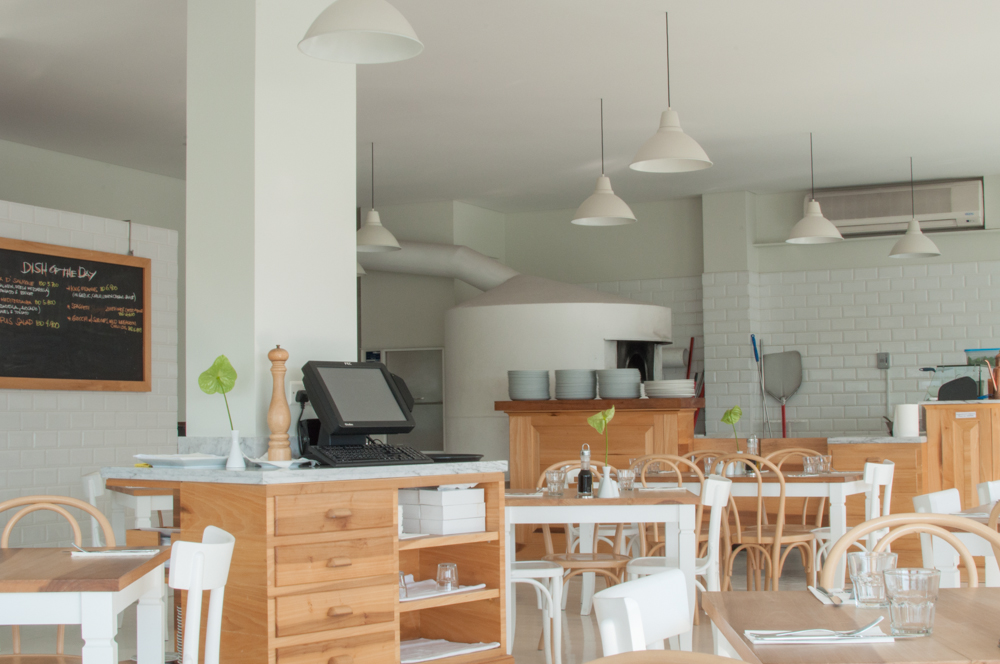 Gusto in Budaiya, Bahrain. Simply the best pizza on the island. 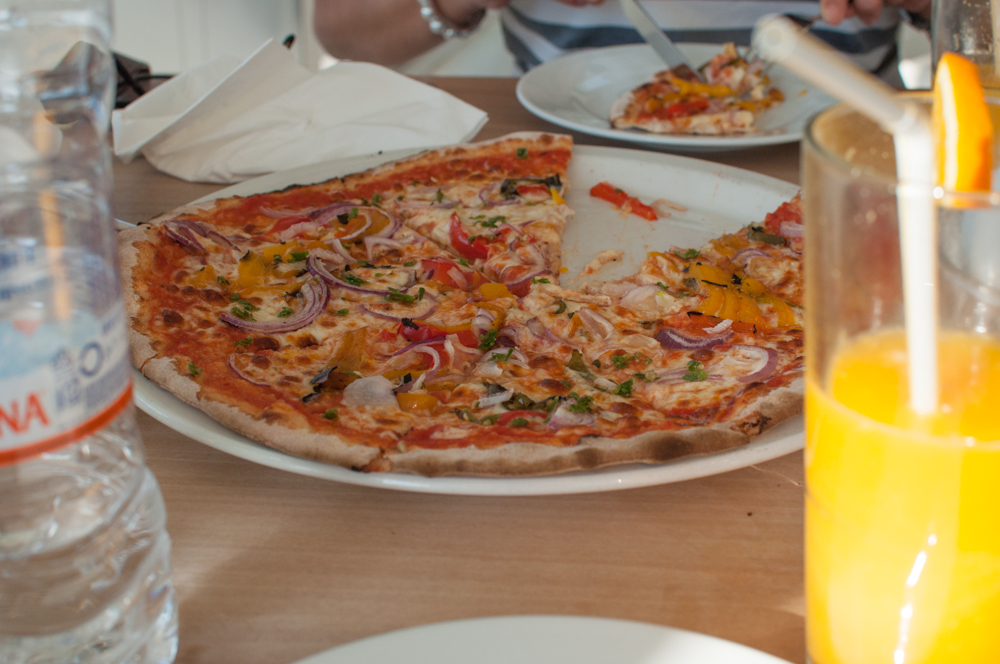 And here’s a photo of one of said pizzas.

I’ll go off food topic for now. Just for a little while. It’ll be back later on.

Got out and about and did some touristy things. The SO drove us into the desert, further south than he’d gone on the island before. We were heading towards the Tree of Life. A lone tree in the middle of the desert which is believed to be around 4000 years old. 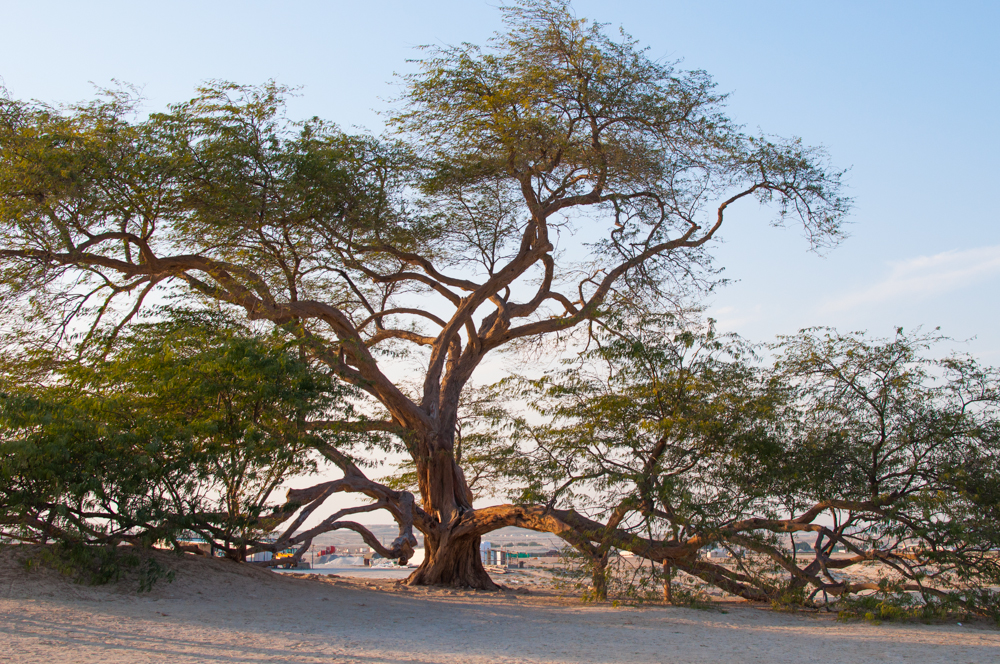 It’s a pretty awesome sight. We got there in the afternoon and sunset was coming up. After a little wandering around we found some helpful information that told us that they’re wanting people to walk around the tree and see it as a piece of art, as it’s different from every angle. Well whoever wrote that was pretty smart, because it turned out to be true.

We didn’t make it all the way around. Blame my Chucks and the amount of sand that was creeping into them and into my socks. Also, the sun was setting and getting out there was an adventure. But driving back out in the dark wasn’t the adventure we were quite up to. 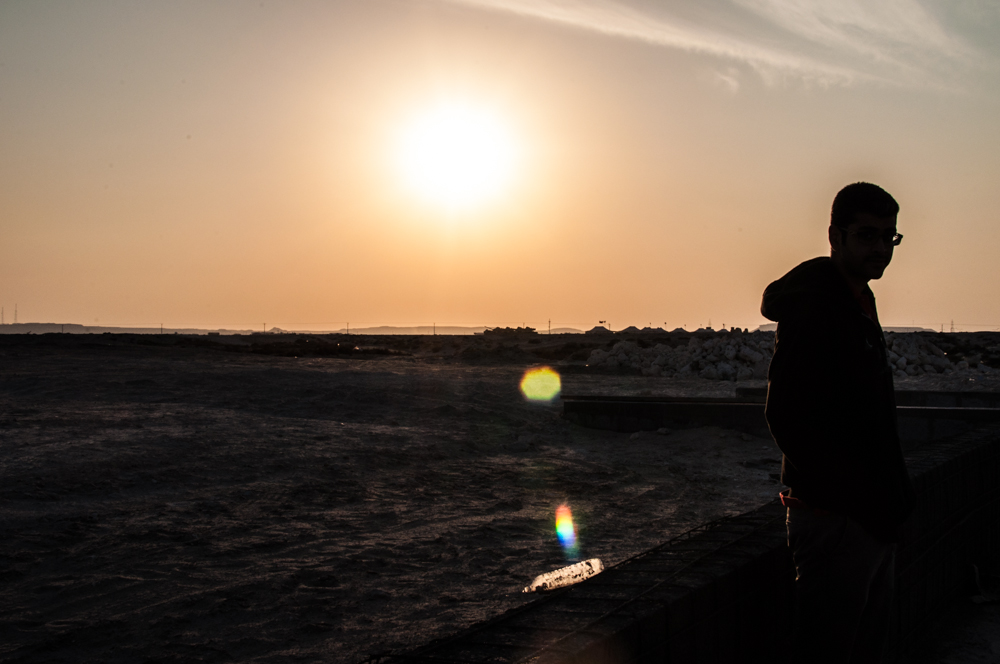 The entire landscape in that area was a totally different Bahrain to one I’m usually seeing. Just a whole lot of nothing and then huge amount of industrial areas. In the desert. Roads that look insanely fun to drive on. (I was happy being passenger. This time.) Maybe one day we’ll make it all the way to the south of the island. It’s not as if it’s huge. What? 30 miles long, I think.

One place I still want to visit and haven’t yet is the Al Fateh Grand Mosque. 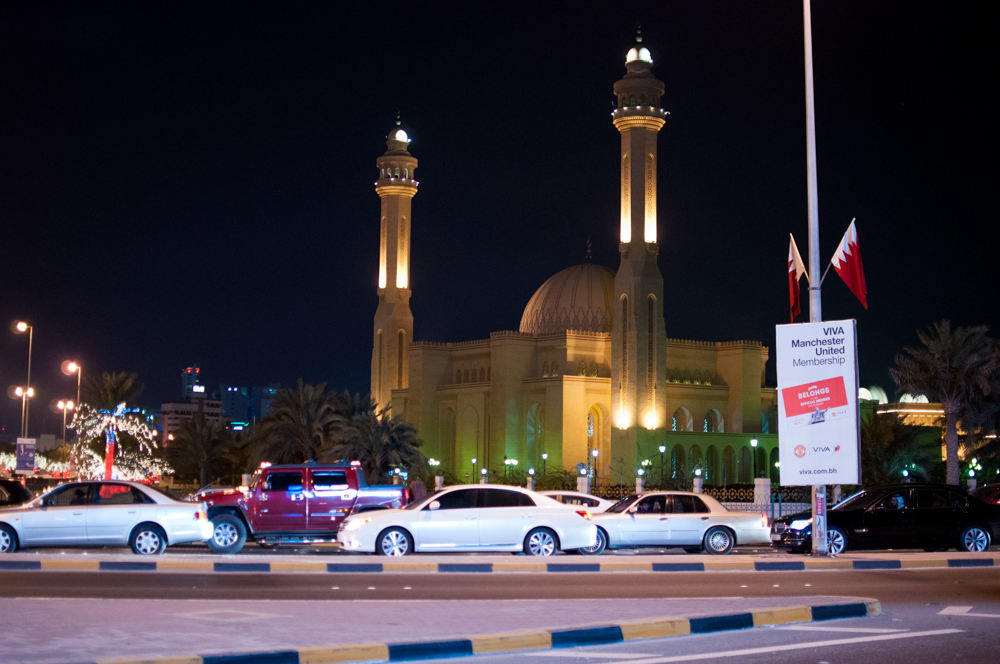 It’s not as if it’s far from us. Literally, walking distance. Just time didn’t allow it this time. They’ll be a next time. It’s a pretty amazing view. Which gets better at night, IMO.

While I was out taking photos of the mosque, I wanted to get some photos of the beautiful lights that were up all over the main streets and buildings from Bahrain National Day. Palm trees covered in red and white lights (flag colours). Far prettier than any of the Christmas lights in London. Again, IMO, but seriously, the lights in London are so eh. 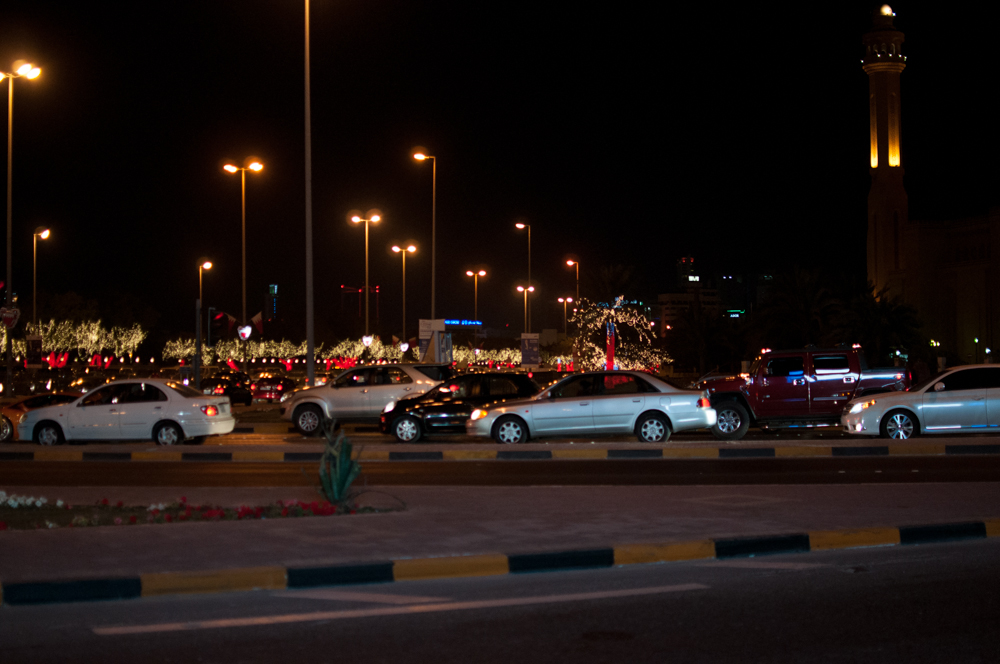 On the left you can see a little bit of the lights. Only a little.

As promised up above, back on the topic of food. Something I wanted to do while I was with the SO was watch a couple of football matches with him. Yes. Before I met him I wouldn’t have gone out of my way to see a match. Don’t get me wrong, I wasn’t not into football. Didn’t mind watching an international game here or there. Just wasn’t into it. Well. He’s made an Arsenal fan out of me. (In my defence, I was an Arsenal fan from waaay back when I didn’t know why I supported Arsenal, I just did.)

There just happened to be a couple of matches on while I was out there. So off we went to his usual – MedCafe in Adliya. There’s no beer. But there is an awesome cold meze platter (Which I don’t have any shots of.). It’s got all the good stuff you’d expect – humus, labneh, tabouleh, some red pepper paste something, and more stuff I have forgotten. That’s some good eating. And a nice place to watch the match. Definitely better than sitting on my sofa praying that the stream I’m watching the match on doesn’t die.

Oh and there was tea! Lovely, lovely Moroccan tea. 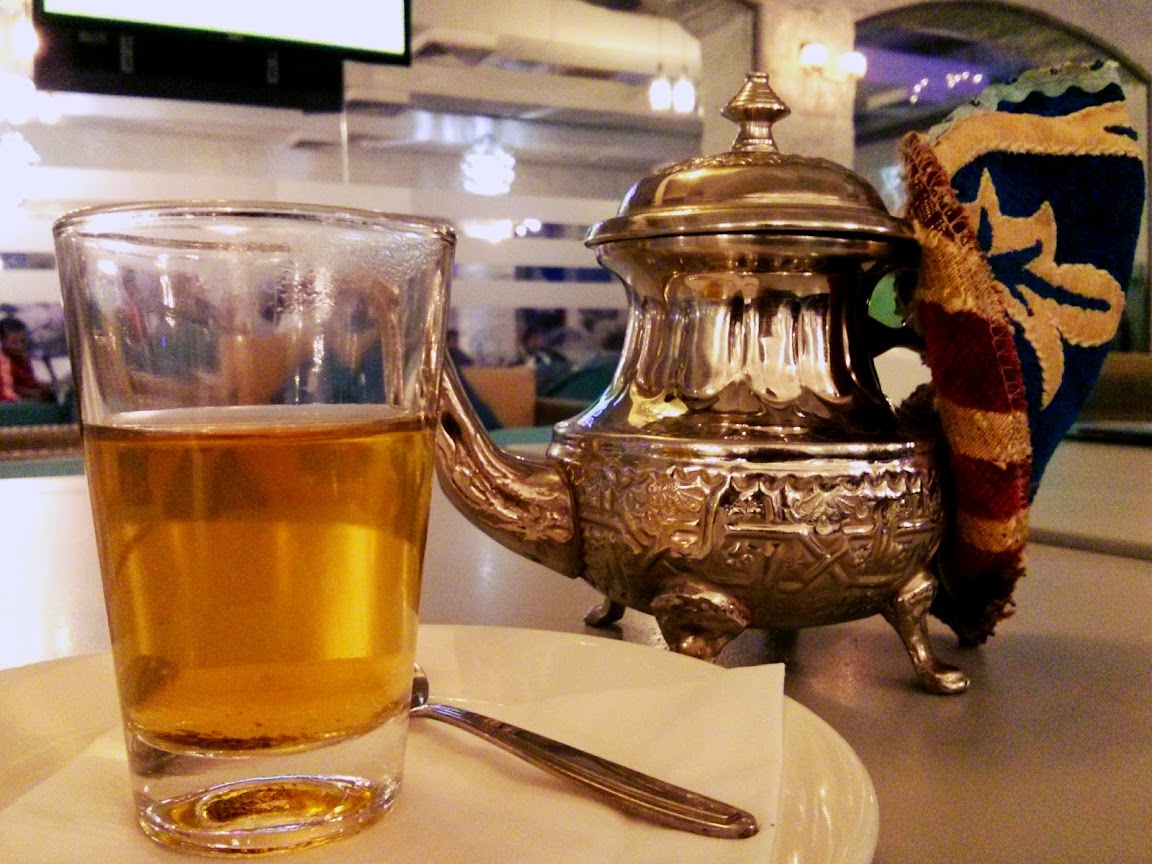 A spot of tea?

I just about got to spend New Years in Bahrain too. Very exciting! And so happy I could spend my New Years with my SO. We opted for a nice meal at a nice restaurant. And couldn’t have chosen a better place – Masso. It’s not often that you call to make a reservation, leave a message and the freaking chef returns your phone call. It’s not often that a restaurant on New Years eve will not rush you to get you off your table and you can have the table for the entire evening. And it’s not often that you get to eat such amazing food in such a relaxing atmosphere. Cocktails, wine, bread and all the food was exactly what we were after. I think. I’m saying we there… yeah, it’s we. Probably my favourite New Years eve, ever.

Sadly, the next day, I was on my flight back to the UK. Massive sad face. Time flew by, as well as feeling like I’ve always been there. Well, I’ll be back again in March and I’m counting the weeks and days until that rolls around again.

(If you want to see all the photos I took, they’re up here.)