Sitting there, watching Ghostbusters for the umpteenth time, I had to remind myself that this film was 30 years old. Sure the CG is a dated and in parts frankly, looks terrible But who cares, when you’ve got the likes of Bill Murray, Dan Aykroyd, Harold Ramis and Rick Moranis on your screen?

Trying, and failing, to pinpoint the first time I saw Ghostbusters in its entirety and drawing a blank. I have vague memories of parts of the film; the opening scene in the library and actually being pretty damn terrified of that first ghost, Slimer, Stay Puft Marshmallow Man and the noise of the hell hounds growling. I really wish I could remember that first time I saw Ghostbusters. 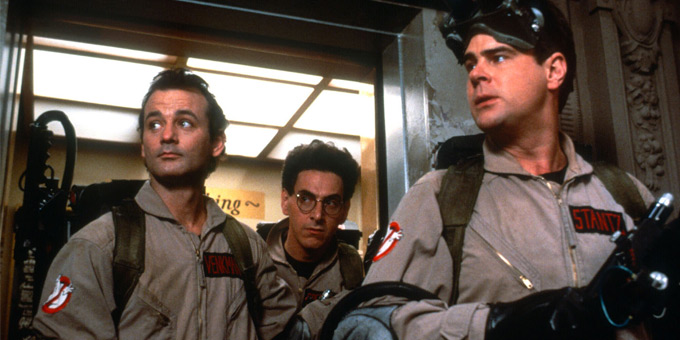 Venkman, Stantz and Spengler. Honestly, where on Earth did these names come from?

30 years on and the jokes are still as funny as they were in 1984. The comic timing is just so perfect. The only thing that dates this film is the CG. ONLY THING. Ghostbusters has that perfect balance of comedy, horror and action that so many films try to mimmick these days but they just won’t. Maybe Shaun of the Dead was close.) There is no way the feeling of Ghostbusters will ever be able to be recreated. There’s just something magical about it.