The blogging community is a little bit awesome. Well, the very lovely T over at The Focused Filmographer was very kind to pass on the Sunshine Award to me.

The Sunshine Award is presented to ‘bloggers who positively and creatively inspire others in the blogosphere.’

Which is flattering and brilliant. Along with this, I have to answer a few questions about myself. Here’s a list of all the award rules: 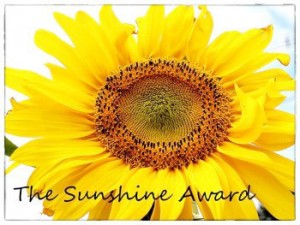 Bryan Cranston. He’s not a household name, right? (According my BF, he’s not. That’s all lies. My neighbours wouldn’t know who Bryan Cranston is!) And no, this isn’t just because of Breaking Bad. But Breaking Bad and Malcolm in the Middle. How can one actor go from playing Hank to Walter White and play them both so brilliantly? They’re total polar opposites. Or if you subscribe to some theories from reddit, they’re both very similar.

Tricky! I love all food. Seriously, sweet or savoury. Anything. My mum’s chicken curry is awesome. My BF’s pancakes are just freaking perfect. I make a very awesome lemon meringue pie, if I say so myself. In the winter, there’s nothing better than a massive warming stew or soup. But then in the summer, I’d give anything for the biggest bowl of salad.

Oh, you know what? BBQ food is awesome. I think there’s a general rule that anything cooked over an open flame or coals or wood or any sort of fire is going to taste good.

Water. Not joking. There is nothing better when it’s freaking hot outside. And it does a whole lot more for you when you’re trying to keep awake at work.

Okay, what else? A GOOD cup of coffee. None of that Starbucks, Cafe Nero, Costa, etc stuff. But a really good cup of coffee. That’s so good that it doesn’t need sugar or milk. It changes flavour as it cools. Mmmm. Freshly squeezed orange juice is fantastic. Sugar cane, lime and ginger juice is damn near perfect. Fresh coconut water – as in from the green coconuts.

Dog. Easy. Not all that surprising. Adore the family pooch, Cody. German shepherd and so, so mental it’s hilarious. Mental in the good way. She’s got such a unique character (Which I’m sure all dog owners will say of their own dogs.) and her quirks make her all the more special.

Thirteen. Yes, this is my birth date, but it’s not just because of that. Or maybe it is. You decide. I like that it’s thought of as unlucky. Because honestly, who really believes that shit?

RED. One wall of my living room is red. My sofas are red. The lamps and rug in my living room have red on them. In my bedroom my curtains and bed spread are red. My car is red. I might have a slight red obsession. Maybe.

Something I’m still trying to figure out. Passion is a strong word in my eyes. I love film. Taking photos. Theme parks. Technology. Food. Cooking. Baking. Film soundtracks. TV. Is it sad to admit that I’ve not found my passion in life yet?

8. Favorite Day of the Week?

Sometimes it’s Fridays. Just because of that feeling when you finish work, and it’s the longest time before you have to go back to work. But then I love Saturdays as well. You can have a lie in. You can have a whole day to do whatever the crap you want. Saturdays have got OPPORTUNITY smacked all over them. Then you have Sundays – Sundays are those days where you have every right to do nothing and just chill. It’s the end of the weekend, so make the most of it!

Night blooming jasmine. The flowers might not look all that spectacular, but oh my god – it smells amazing! Just beautiful. I used to have that growing outside my bedroom window and in summer, whenever I had the window opening while I slept, my whole bedroom smelled of it. A-mazing.

Django Unchained. Hey, the film was released in 2013 in this country. So I count this in my 2013 list. Tarantino’s film soundtracks are always pretty much perfect. I’ve been fairly disappointed soundtrack wise this year. Had high hopes for M83’s Oblivion soundtrack, but it lacked anything spectacular. Enjoyed Ramin Djawadi’s work on Pacific Rim, but again, it lacked anything amazing. Oh and was a little bit disappointed with Hans Zimmer’s work on Man of Steel. Again, it just wasn’t all that memorable.

That’s those questions answered. Guess it’s now my turn to pass the questions on to ten more people. Trouble is, I am VERY sure that almost every blogger I know has already been tagged in this. So apologies if you have already!

Thanks again The Focused Filmographer for sending this on to me.