As Mel said not too long ago, the only time someone asks how your weekend was is because they want to tell you how their weekend was. Yep, that’s what I’m doing here.

How did y’all spend your bank holiday weekend? It was my first weekend here in Bahrain and, well, I didn’t exactly sit still.

Saturday – the day of getting shit done

Saturday it was all about the shopping. Food shopping, house shopping and general shopping. After a decent lie in we headed to City Center Shopping Mall, in Seef, for a late breakfast, which turned into lunch. Fuelled up by PF Chang’s it was off to the shops for random ‘necessities’. Things like bowls, bins and toiletries. There was a lot of walking. All over the mall.

City Center is a BIG shopping mall. Far bigger than Westfield in London. Which is the one I’m ‘used to’. And requires a significant about more walking than I expected. In hindsight, I should have rethought my footwear and given the Haivanas a miss.

Food shopping followed after. I think we enjoy food shopping a little too much. Nah. We don’t. Obviously, there’s no Tesco or Sainsbury here. There is an M&S and I believe at one point, there was a Waitrose. But I digress. There is an Al Jazira. Well, many of them. Your standard supermarket really. Currently, trying to figure out the equivalent brand of foods I can get here for things like orange juice. Because Tropicana is damn expensive in Bahrain. Say, three times more expensive. Sad times.

Food shopping done, and with some Ben & Jerry’s Peanut Butter Cup in tow, we headed home for a little bit of down time before heading out to Sherlock for the Champions League Final. Never been to Sherlock before and it was nice. Apart from nearly getting suffocated out by the amount of smoke in there.

The very dark Sherlock pub at Gulf Hotel. With appropriate posters on the wall.

But there was an amazing atmosphere for the match. The food was good with pretty big portion sizes, and there was beer! (Though I failed to drink any.)

Saturday night some spur of the moment planning for the following day took place. We (The OH and a couple of our friends.) decided to head out to Aldar Islands on Sunday. Early. Ish. A day out at the beach – awesome!

Sunday – the day of getting knackered doing very very little

So, Sunday rolls around and we have an early start to get ready to go to the beach. Aldar Island is a tiny little island. REALLY tiny. There’s a beach, a few villas for overnight stays, a little bar and outdoor cooking area. And that’s pretty much it. But it’s the perfect place to spend a day at the beach.

Our little spot on the little beach on Aldar Island. What’s not pictured is the nearly 40 degree heat!

A boat takes you out to the island and you have to pay to go there. 5BHD (Bahraini Dinar) will get you to the island. Once there, you’ll have to spend 1BHD on sun-beds (A necessity.) and further if you want to rent towels and have something to drink or eat.

We definitely went a little too late into the summer season. It was ridiculously hot. I mean, epically hot. But once we got in the water, it was fine. The saltiest sea water I’ve ever had the pleasure of being in, but so much fun. 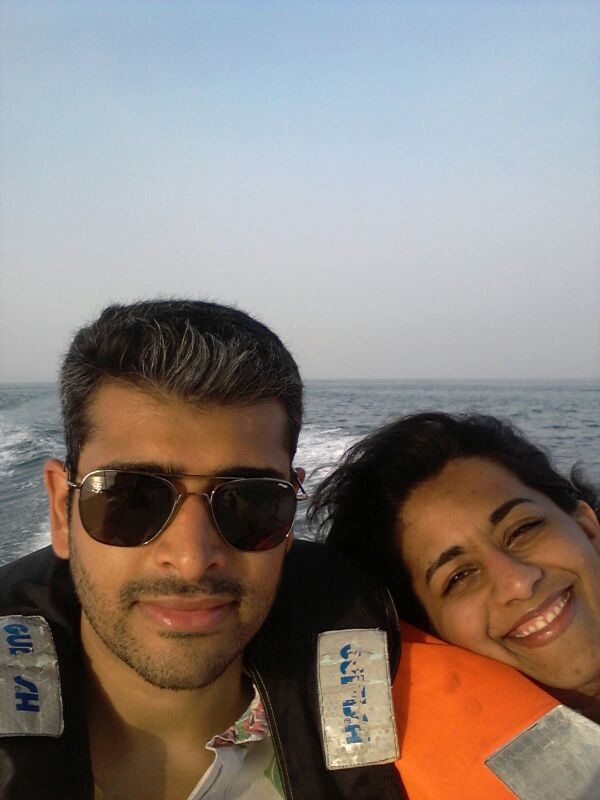 Obligatory “We’re on a boat mother fudgers!” selfie. Excuse my face though. While he looks perfectly awesome, I look like I got dragged through a hedge backwards.

There’s something about the combination of sun, sea, sand and salt that makes you insanely tired. The last boat leaves the island at 5pm, which is when we made our departure. Knackered, sun tanned and starving.

And this is when we headed to Senor Paco’s for dinner. A Tex-Mex restaurant in Adliya. We went there for the margaritas. And some of the food. The food isn’t bad. Lots of cheese. And huge portions. The margaritas are pretty damn good though.

Barely even 9pm and we were pooped! Shower and bed. It was comforting knowing that the next day was a bank holiday and that there were further plans to make the most of the day off.

Bank holiday Monday morning and I’m treated to pancakes. One of my favourite breakfast meals ever. Especially these pancakes. Yum!

Possibly the best pancakes I have ever had.

I’m a little vague at what happened between the morning and the evening. Aside from some cooking for lunch and general mooching around. Evening time, it was race time. Race time at the Bahrain International Circuit. In go-karts.

Go-karting can get pretty competitive. For ourselves. The BIC is pretty good in that, you get registered there and every time you go, your track timings will be recorded. So we’re always trying to beat ourselves. And each other. To an extent.

The Bahrain International Circuit. Ignoring the ridiculous comments from the workers, much fun was had.

It was hot. Very hot. Like all nights are going to be from now on. Combine the 35+ degree C heat with having to wear the full driving overall, gloves and helmet, it was extremely hot. But always worth it. Well except for getting told off by a track official when I over steered and ended up in the sand on the side of the track. Was asked, “How did you get here?”. I over steered and ended up here. “Why?” WHY DO YOU THINK! Followed by a mini lecture that I shouldn’t be driving so fast. Erm, it’s go-karting. You kind of have to drive fast. Aside from that little annoyance, it was good fun.

Totally drained, we headed back home for a home cooked meal and sleep. And that there was my bank holiday weekend, how was yours?